The Elvis Multi Strike is an exciting new type of 3 in 1 slot game, Elvis Multi Strike Slot is like playing 3 slot machines in one. There are also 2 great bonus rounds, where the sights and songs of Elvis will rock you, leaving you all shook up!

If two Photo Memories symbols land on the first two reels of any level, the Rockin' Respin feature starts. Those reels "lock up" as do any other reels with Wild Rockin' Respin symbols. The remaining reels will respin again.

In the Photo Memories bonus, clicking the Spin button will start an arrow spinning on a record surrounded by a collection of Elvis photos. Once the arrow stops it awards a Photo Value, based on the total bet on the reel level that triggered the bonus. The photo will be replaced with a Collect symbol after it is put into the photo album at the bottom of the screen.

As the Photo Memories bonus game continues, additional arrows are added (up to eight), the values of the photos increase. As photos are collected, so more Collect symbols are added to the record, if an arrow points to a Collect symbol, the bonus is complete.

Pick one of the 5 televisions, each lists a different Elvis song. The game will then show you concert footage of Elvis performing that song. During the song, the crowd will go crazy at different points in the song.

On the left of the televisions, the indicator needle of the Fan-O-Meter will move, showing how strong the audience response is; the louder and more the audience cheers, the higher your win amount.

If the audience manages to "peg the meter" at its ultimate spot, you will be rewarded with an Encore - another pick of a remaining Elvis song for an additional award! Up to 5 concert clips may be played. 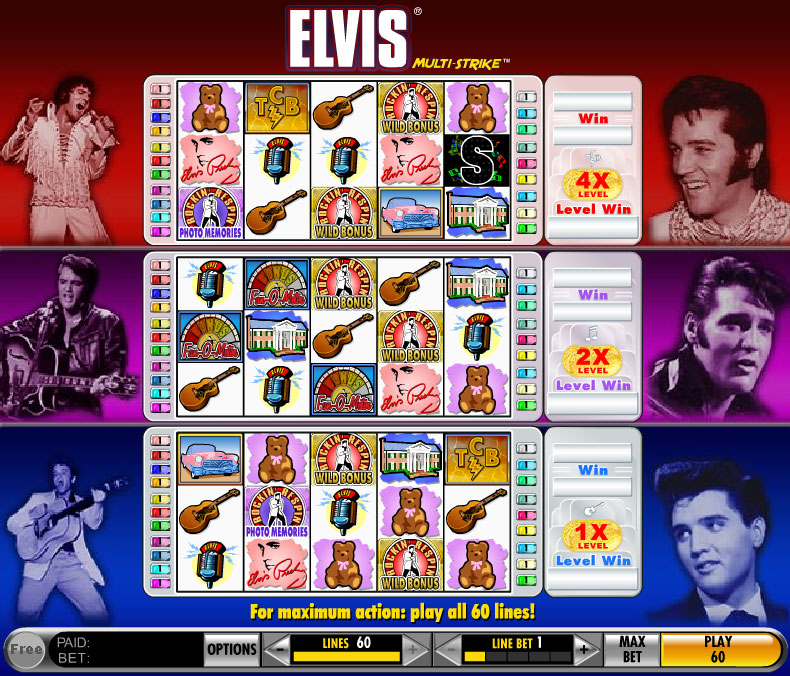